Cookies are a set of data stored on a user’s device when the user browses a web site. The data is in a file containing an ID number, the name of the server which deposited it and, in some cases, an expiry date. We use cookies to record information about your visit, language of preference, and other parameters on the site in order to optimise your next visit and make the site even more useful to you.

To improve your experience, we use cookies to store certain browsing information and provide secure navigation, and to collect statistics with a view to improve the site’s features. For a complete list of the cookies we use, download “Ghostery”, a free plug-in for browsers which can detect, and, in some cases, block cookies.

You can also visit the CNIL web site for instructions on how to configure your browser to manage cookie storage on your device.

It is also possible to block certain third-party cookies directly via publishers:

The following types of cookies may be used on our websites:

The idea of this seminar is to give an opportunity to young statisticians from several countries to meet and present their work in an international meeting. Two series of invited lectures on mathematical statistics and their applications in the real life will be given by outstanding speakers.

This year, the invited lectures will be given by :

Large-scale machine learning and convex optimization.
Many statistics, machine learning and signal processing problems are traditionally cast as convex optimization problems. A common difficulty in solving these problems is the size of the data, where there are many observations ("large n") and each of these is large ("large p"). In this setting, online algorithms such as stochastic gradient descent which pass over the data only once, are usually preferred over batch algorithms, which require multiple passes over the data. Given n observations/iterations, the optimal convergence rates of these algorithms are O(1/\sqrt{n}) for general convex functions and reaches O(1/n) for strongly-convex functions.
In this tutorial, I will first present the classical results in stochastic approximation and relate them to classical optimization and statistics results. I will then show how the smoothness of loss functions may be used to design novel algorithms with improved behavior, both in theory and practice: in the ideal infinite-data setting, an efficient novel Newton-based stochastic approximation algorithm leads to a convergence rate of O(1/n) without strong convexity assumptions, while in the practical finite-data setting, an appropriate combination of batch and online algorithms leads to unexpected behaviors, such as a linear convergence rate for strongly convex problems, with an iteration cost similar to stochastic gradient descent.

Statistics with matrices, graphs, and tensors

Many modern datasets take the form of matrices or tensors. Applications range from
collaborative filtering to network analysis, to imaging. I will survey some basic statistical models, and
techniques to deal with them. Possible topics will include:
1) The spiked matrix model.
2) Semidefinite programming relaxations.
3) Z2 synchronization and the two-groups stochastic block model.
4) Sparse low-rank matrices, and the hidden clique problem.
5) Message passing algorithms
6) Estimating low-rank tensors.

The 2017 edition is launched.
Read more 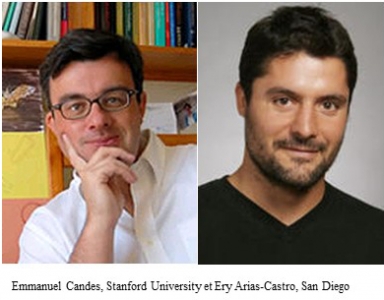 MIA-Jouy merged with MIG to create the MaIAGE Unit on January 1, 2015